The December meetup started earlier at 6:30pm like last time. The turn-around was smaller (40) this time, possibly because its December and many people are on holiday and students/professors are preparing for exams. For people working in retail-related industries, Christmas season is the busiest time of the year, while others are preparing for the holidays.

Even then this tech meetup was one of the best we have had since we started. We had two great demos, an interesting talk, and lots of pizza and beer for everyone.

We started early like last time (6:30pm) and the initial chat and pizza took us an hour. We started with the presentations by 7:45pm. We had initially planned on each demo/talk taking 15 mins including questions, but it took much longer and in the end, all talks finished only by 9:30pm.

But the quality of the discussion was really good, be it Andrew explaining policies of Google and use of analytics, or Thanasis defending Java and the design decisions behind his game, or Gordon explaining their plans to take over the world of Spreadsheets.

So let us get to the talks…  <h3>Web Analytics</h3> Andrew Hood who founded Lynchpin Analytics gave a quick rundown on Analytics, what it is and why to use it. He explained how advanced analytics can help websites track the sources of traffic and the flow within the website.

Analytics can also track how successful various marketing campaigns (like AdWords/AdSense) and referral strategies have been. In today’s world of cut-throat competition for attention on the web, successful marketing campaigns are critical to a websites’ fortunes. But failure or success can only be understood and replicated if hard statistics are available for the decisions being made. Online Analytics is a way to achieve this understanding.

Lynchpin from Sam Collins on Vimeo.  <h3>Crazy Space</h3> Casual Gaming is a pretty big industry ($2.25 billion in 2008) and is growing fast. The industry consisting of small and easy to play games like Solitaire (Microsoft), Tetris (Tetris Holding) and Bejeweled (PopCap Games) is aimed at “non-gamers”. These games are intended to be for relaxation and quick entertainment, and are mostly aimed at women (comprising 75% of the sales). The reason we don’t hear a lot about these games is that these gamers don’t tend to talk a lot about their gaming habits and they usually don’t identify themselves as gamers. 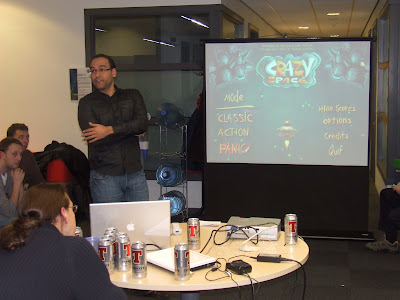 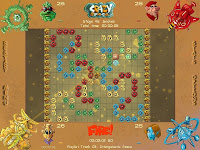 Thanasis Theocharidis who has been working on casual games for many years, gave a demo of his game “Crazy Space”. Crazy Space is a “Othello” inspired game which has been engineered ground-up. Thanasis wrote his own libraries for online AI calculations and fast hardware acceleration in Java. The game can also run on Google’s new Android mobile platform.

Dot Red Games from Sam Collins on Vimeo.  <h3>Hypernumbers</h3> The charm of starting a start-up is to dream big and think different. But alas, even in the startup world, very rarely do we see ideas that are truly original and ambitious. And this is what excites me most about Hypernumbers. 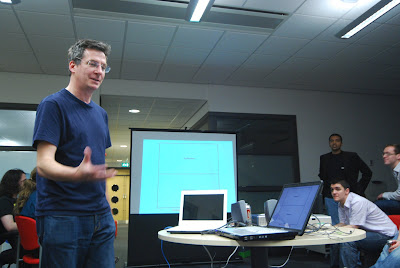 The charm of starting a start-up is to dream big and think different. But alas, even in the startup world, very rarely do we see ideas that are truly original and ambitious. And this is what excites me most about Hypernumbers.

The whole idea of Hypernumbers is a little hard to grasp in beginning, and it looks like another online version of Microsoft Excel. But its purpose is to build a platform using which any non-developer/non-programmer can easily build their own websites. You say: Hold on… what?

The point is that this allows a huge number of non-technical people who know how to use and write macros in Excel, to easily create websites.

Gordon Guthrie, Dale Harvey and Hasan Veldstra have created a highly scalable architecture in Erlang from scratch. They have written their own parsers for Excel documents (along with 100k compatibility tests) and Gordon tells me their system has recently crossed 90% compatibility.

Hypernumbers were funded by SeedCamp in 2007 and are looking to launch their first beta product this year in March. So stay tuned at http://hypernumbers.com/.

See slides of Gordon’s previous talk on Erlang.  <h3>Photos</h3> I was in-charge of the photos this time and didn’t do a very good job :-(. But I did take a lot of pictures and by the “law of large numbers”, some of them did turn out to be good… They are here.  <h3>The Website</h3> Colin has been working hard on the Tech Meetup website, and it should be functional and up pretty soon… Do send us any feedback as it is supposed to be used by you guys…

The next meetup is on 14th Jan. Hopefully everyone will be back from holidays and we will have a great Tech Meetup again…