January the 14th and it was time for the 5th Edinburgh techmeetup, the New Year hangover cleared up earlier than expected and it turned out to be one of the busier meetups. Introductions followed by pizza, beer and casual chat kicked off the night followed by 3 talks. 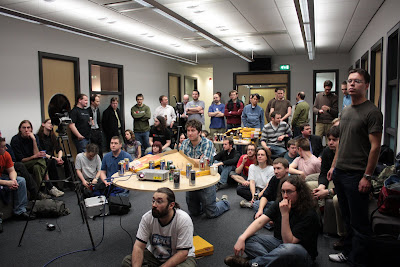 Tane Piper opened the talks introducing Twestival, an event for twitter users to meet up, have a drink and enjoy some music, any money raised by the event will go to http://www.charitywater.org.

T-shirts, advertising space, a flip mini and more have been donated by sponsors http://www.facebook.com/event.php?eid=42937069075 for more details. 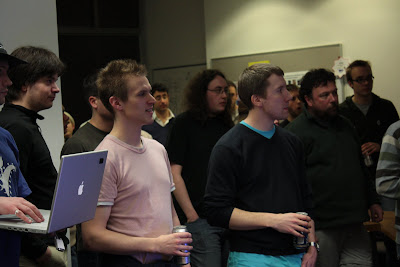 Graeme Mathieson from Rubaidh then gave some anecdotes following his migration to Ruby and experiences on Ruby projects. There weren't many technical details in this talk as Graeme wasn't sure what audience to expect, but the anecdotes brought up some interesting questions and the ruby crowd stayed on for the pub afterwards and were happy to field the follow up questions. 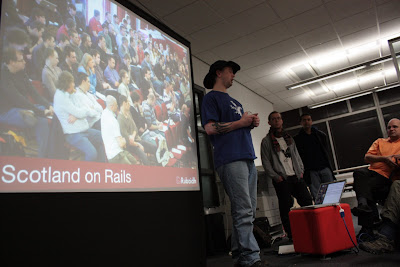 The talk briefly introduced migrations which allow developers to seamlessly manage upgrading and downgrading databases, the Capistrano tool which is written in but not specific to Ruby, used to help users automate the deployment of applications along with other administrative details, as well as a discussion about the expressiveness of the Ruby language “bringing the joy back to programming”.

The overall message was that Ruby(and Rails) have provided the tools and language that that web developers need to deploy applications quicker than ever, Ruby has also managed to build the same sense of community that made PHP the first choice for most developers until recent times, which was evident on Wednesday. Looking forward to seeing more cool things (slicehost, github, basecamp) from the ruby community in the near future.

As hard as he tried Graeme couldn't help but mention the upcoming ScotlandOnRails conference that he is involved in organising, you can found out more @ http://scotlandonrails.com/ . Graeme's presentation from the night is up on slideshare.

Hasan Veldstra from Hypernumbers introduced git to those who haven't used it before, some pretty big claims made for an informative question/answer session after the talk. GIT is a source control manager created by Linus Torvalds to manage the Linux kernel. It is a distributed SCM, which allows it to avoid imposing a work flow using a central repository as svn does. A central “canonical” repository is supported, but it also gives you the ability to share changes between your peers and structure your source control to match they way your team/project is organised. 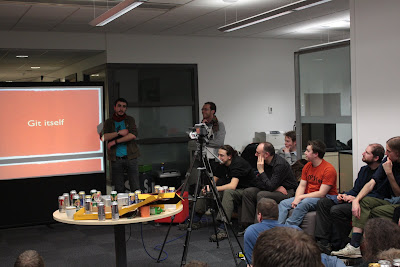 Git is faster for most operations, allows off-line access for full history and off-line commits, is used by a variety of large software projects (Linux Kernel, Google Android, Fedora) and doesn't deserve its “hard to use” reputation.

Hasan did point out some areas where git wasn't strong, partial repositories are a pain to deal with, which is a problem for projects such as game development which can typically have huge repositories for a single project, this is inherent to git's design. the lack of performance when handling binary files was also mentioned, which is more down to lack of attention from the developers and likely to be improved.

Hasan’s slides from the evening are here.

Before and after the talks Martin Ling stole the show with a demo of his Quadrotor, a remote controlled auto stabilising helicopter with 4 rotors. Mikrokopter.de Is the actual design, but technical details aside it was just cool to watch, and certainly in the spirit of the meetup, watching people demo cool tech projects.

Thanks to Marius for the photos (more here) and we'll see you all next month! 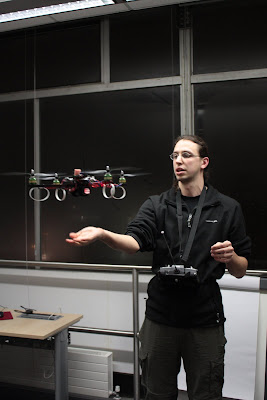 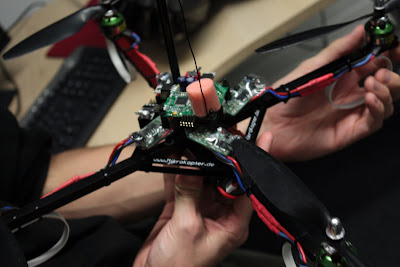 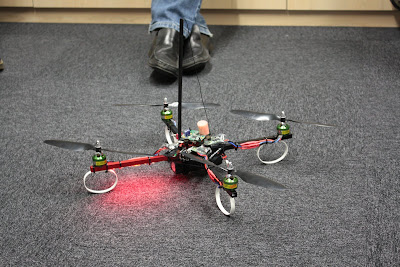