One would think that there must be very little in common between these two topics. And they would be almost right. Except that the July TechMeetup in Glasgow held two very diverse presentations covering the ninja-esque training styles of developers found in Coding Dojos and the ongoing successes and strains of Channel 4’s Innovation for the Public (4iP) fund.

It turned out to be a very interesting evening with great energy amongst all who attended, and as usual I got to speak with a few people whom I’m delighted to have met. A big thanks to Wireless Innovation who sponsored the beer and pizza (and serious props to Heidi for the range of beers and pizza/sides). Alastiar Gunn from Wireless Innovation also announced about the Orange developer team coming up to Glasgow for a few days in August, and the OMPT Mobile Barcamp to look forward to in September. More on this will follow, we’ll post up details once we get them but I also believe information can be found at 38minutes. 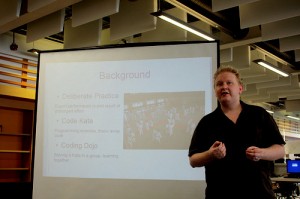 Joe had a great time presenting the concept of Coding Dojos, a concept that was stirring up a lot of question prior to the talk. I suppose everybody thought this was some sort of fusion between hacking and ninjitsu and to see the first few slides start off with photos of developers wearing bandanas made me think that might just be true.

Coding Dojos, is really developer “practice” in a social, but intensive environment. The reality is that developers learn on the job, and make mistakes during a project - rather than training in off the job, in outside practice. Coding Dojos is a place where developers can practice and fine tune their skills, to then take a better quality of development to the real life projects. Laurent Bossavit set up the first Coding Dojo in Paris where he took a “coding kata” - a relatively straight forward and repeatable task - and encoded it in front of the audience. The audience is then prompted for feedback on improvements or what would others have done, given the same task. The concentration is on continuous learning with an involved crowd.

1) Use either behaviour driven, or test driven development.

2) Everyone has to understand what’s going on. Everyone should be able to cooperate on the problem.

All that’s needed to get started is a room, a projector, a group of programmers, and at least one machine. Joe runs his own Dojo in JP Morgan, internally. He explains that it is an easy and cheap way to invest in training for the development staff. Joe pushed the idea that this might be an interesting method to hiring developers: rather than sitting at a desk and scanning CV’s with somewhat arbitrary work experience, this would be a direct presentation of the developers ability to work and more importantly, an illustration of their thinking process.

Joe covers all the fundamentals of Coding Dojos, from the founding principles through to operating models and a few guidelines on what works and what doesn’t work. The topic inspired a lot of interest from the crowd and I’m exciteed to see what dojos might start to pop up after this. Bam, 15 minutes, great talk, check it out.

Ewan McIntosh and the Quest of 4iP

I’m just looking over the video taken of Ewan’s presentation, and eerily enough it’s 38 minutes long - that is some very subliminal branding. It was an insightful talk from Ewan and true to TechMeetup, it was a snap 15 minute talk - so the length of the video is indicative of the amount of questions (slash grilling) thrown at Ewan. For anyone interested in 4iP, it’s operations, motivations and progress so far this is a must watch. 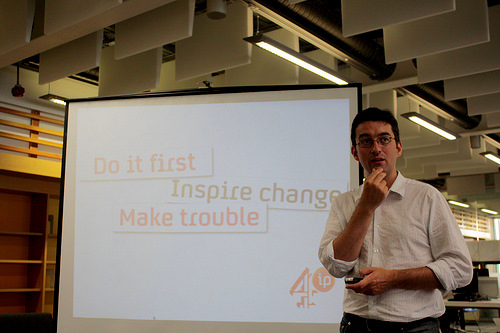 I presume that many of the readers of this blog are based in or around Scotland and hence are familiar with 4iP, 38minutes and Mr McIntosh himself. The 4iP fund is well explained over here and the community that has formed around this initiative can be found over at their social network, 38minutes.co.uk.

I won’t go through a step by step explanation of the video because the video is much more informative - but I’ll highlight some of the key mentions and insights covered. 4iP has invested just over £1million in Scotland, and Ewan reckons that about 5% of the submitted applications get funded. The other 95% get rejected for a number of reasons, primarily:

Ewan had an interesting explanation on how 4iP characterise ROI (return on investment) - which for them, is really more about returning attention, rather than financial gain. This is certainly clever, in this space it’s important that any projects aimed at the public - are actually known about by the public, and for this the projects need to be high in buzz and well-talked about. Later on in the game, once people are aware of and using the product or service, there can be a bit more thought about revenue models and how to sustain further growth. The cleverest revenue models in the world can’t make money when there are no users.

Here’s some simple checks to make before you approach 4iP: 1) Google. Have you checked that you really are innovating or are you just unaware of what’s going on elsewhere in the world? 2) “X is the only Y that allows these folk in this place to do this at a time when..” If you can fill in this sentence with your product, it’s benefit, and the target customers - obviously it’s important that you keep the word “only” in there - then there’s definitely something worth having a chat with them about. 3) Are you a destination site? If so, are you aware what it takes to actually create a destination site? Bear in mind that people sit on a handful of sites namely Facebook, Flickr, Last.fm, Google (arguably) etc. These are destination sites. 4) Does it make peoples lives better?

In my opinion, 4iP is a fantastic opportunity, the guys responsible deserve a huge amount of credit for what they are attempting to do. It’s absolutely worth investigating whether it’s right for you - but remember this is still an investment fund and as such they have requirements and an agenda and you must fit with these in order to create a suitable match. 4iP is generally very flexible in terms of how they arrange the investment - equity stakes, revenue shares etc and Ewan touches on these in the Q&A; part of the video. The next tranche ends on August 23rd so get your applications in and see if 4iP can help you help others.